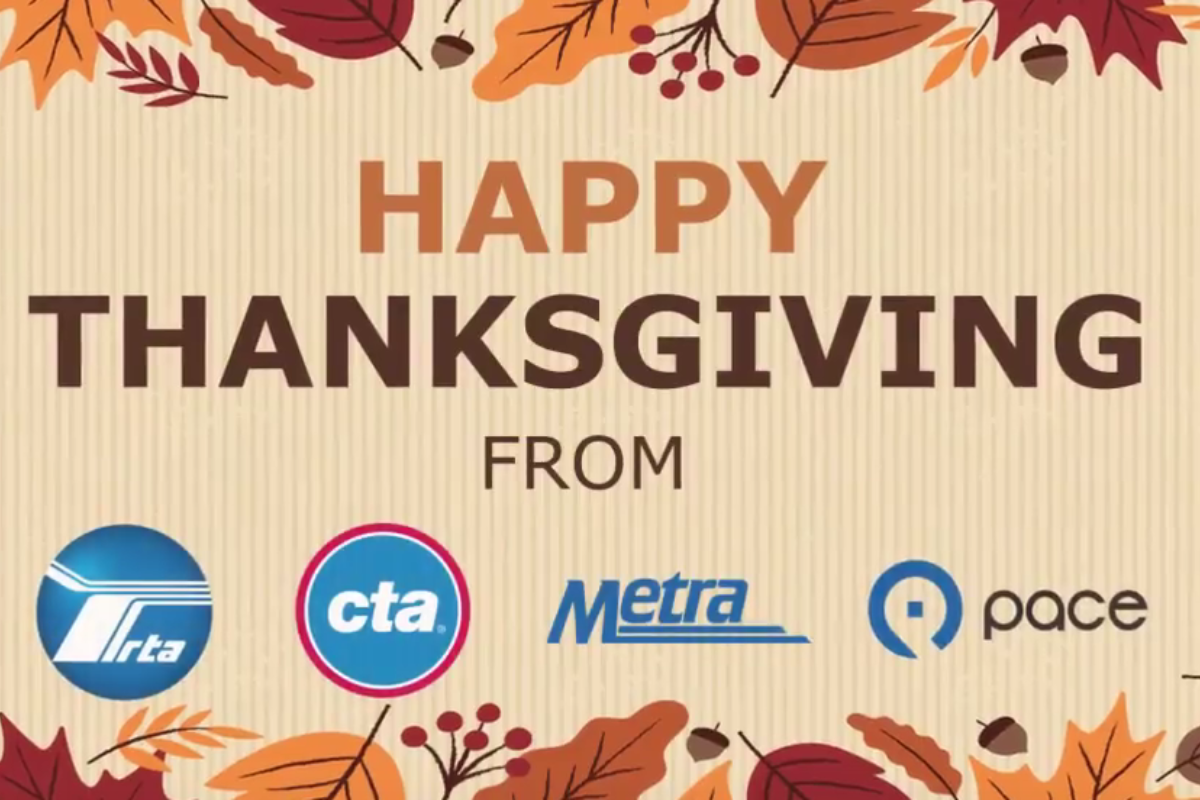 The public comment period is open for the proposed 2020 regional transit operating budget and capital program until December 19, when the RTA board will consider its adoption.  Please feel free to send comments to communications@rtachicago.org.

Everyone at the RTA wishes you a very Happy Thanksgiving.  This has been a momentous year for transit funding in our state, and we have many reasons to be thankful.

After nearly a decade without a State capital program, Rebuild Illinois was passed by the General Assembly and signed by Governor Pritzker in June.  The new State funding nearly doubles our region’s previous five-year regional capital program of $4.3 billion, taking it to $8.3 billion for 2020-2024.  The annual capital funding program for 2020 alone is $2.12 billion, and overall operating expenses are increasing slightly more than one percent next year, for a total of just over $3 billion.

The Rebuild Illinois capital bill provides the regional transit system with $2.6 billion over five years in new bonding authority and an estimated $227 million annually in sustainable revenue, referred to as “PAYGO” funding. Together, these new State funding sources represent 45% of the proposed five-year capital program, which focuses on bringing the system toward a state of good repair, expediting overdue repair and replacement projects, and reducing the backlog of deferred improvements.

While a significant step forward, this capital funding does not solve the region’s projected $30 billion in transit capital needs over the next decade.  It will, however, begin to decrease the over-reliance on federal capital funds and prevent the percentage of assets that are beyond their useful life from increasing, as had been projected without Rebuild Illinois.  Riders will benefit from improved reliability, accessibility, and customer-facing features.

The RTA and the Service Boards (CTA, Metra, and Pace) prepared for this long-awaited capital infusion by establishing clear priorities with the Invest in Transit strategic regional plan, adopted in 2018. To allocate funds in the 2020-2024 program and continue building on Invest in Transit goals, the RTA and the Service Boards have now stated five new principles that will help further refine the increasingly collaborative and transparent annual budget process:

Additionally, the RTA and Service Boards will closely monitor and report expenditures on a quarterly basis, with the spend rate and amount of unspent dollars factoring in future budget cycles during the initial five years and beyond.  Following this 2020-2024 budget cycle, the RTA and the Service Boards will work collectively on the details — including the timeline and scope — for refining this budget process.

The significance of the Rebuild Illinois funding is unmistakable, as shown by the following highlights from each Service Board’s five-year capital program.

CTA’s portion of the proposed 2020-2024 capital program is more than $5 billion, of which Rebuild Illinois is nearly two billion.  CTA will focus on state of good repair projects that improve service reliability and customers’ transit experience.  This includes investing in new buses and trains, rail line and bus modernizations, and station improvements.

Metra’s portion of the proposed five-year capital program is just over $2.5 billion —and about one and half billion is provided by Rebuild Illinois. With many older rail cars and locomotives, Metra continues to concentrate its capital budget on working toward a state of good repair to provide riders with a positive, reliable transit experience.  That means purchasing new rail cars and overhauling existing ones and investing in stations, parking lots and track and structure renewal.

Pace’s 2020-2024 program, including Pace ADA, is $568 million—and more than half is provided by Rebuild Illinois. Pace ADA will get all $20 million of its capital funding from Rebuild Illinois. Pace plans to focus on replacing its buses as well as maintaining and expanding some services, which will provide a more robust and reliable system for Pace riders. That means investing in new and existing garages, buying new buses and paratransit vehicles, new technology and new stations.

We hope you have an enjoyable Thanksgiving celebration and remember “what fun it is to take transit all the way!” this holiday season.