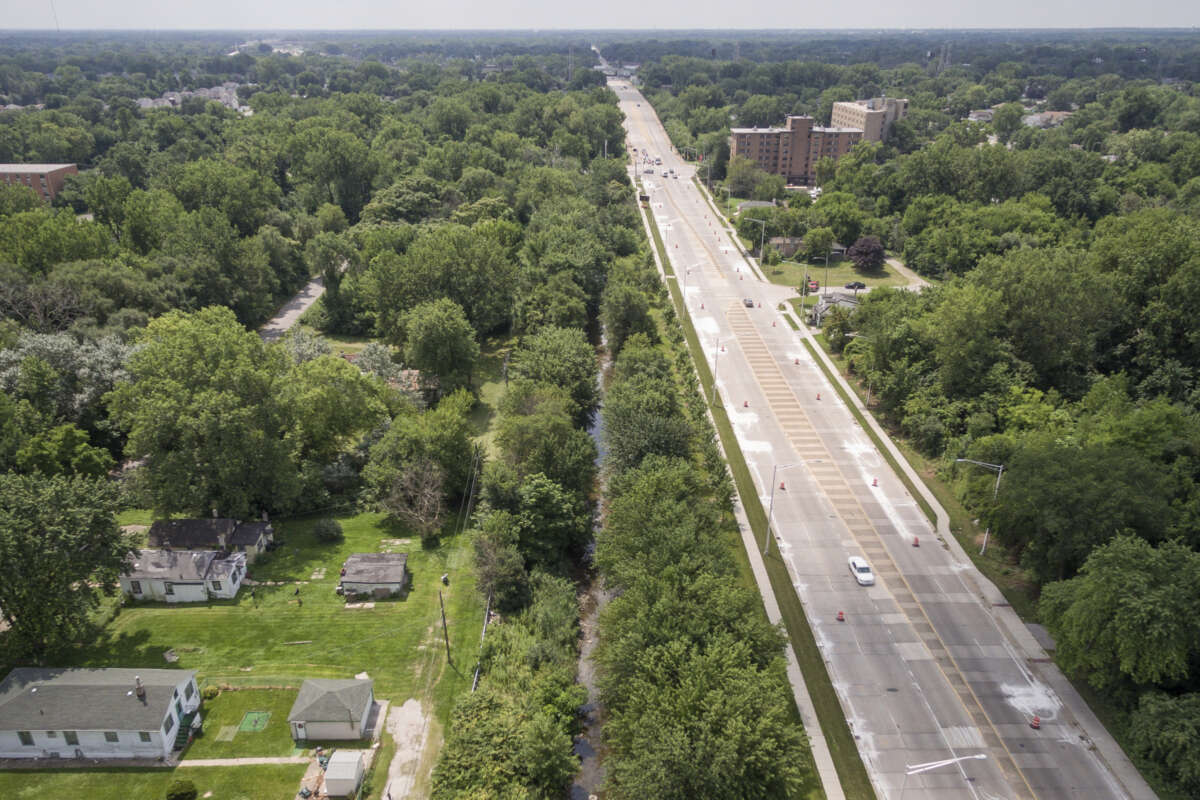 The Village of Robbins, with support from partners around the region, is beginning a project that will revitalize the economy, mitigate major flooding issues, and support transit-oriented development for years to come.

A large part of Robbins sits within the floodplain of Midlothian Creek, a tributary within the Little Calumet River watershed, on top of historical wetlands, according to the Metropolitan Water Reclamation District of Greater Chicago (MWRD). The flat terrain and lack of stormwater infrastructure has led to frequent flooding and caused pollution into the waterways, and the banks of the creek have eroded with invasive vegetation that diminishes diversity and native pollinator habitats.

The MWRD, Village of Robbins, Illinois Environmental Protection Agency, Chicago Metropolitan Agency for Planning (CMAP), RTA, and other partners have been working on a plan to mitigate local flooding, restore Midlothian Creek, and create recreational and economic development opportunities to strengthen and revitalize Robbins. On Friday, August 12, partners from around the region celebrated a groundbreaking for the Robbins Stormwater Park.

“The residents of Robbins who have contended with frequent flooding and polluted waterways will instead have access to a beautiful park, and the village will open up to new residents in ways that would not be possible without this flood mitigation effort,” said Michael Horsting, Manager, Local Planning, for the RTA. “Focusing on transit-oriented development will connect residents and the village itself to great economic opportunity, and the RTA is thrilled to see this work ramping up.”

The project will be completed in two phases, with stormwater improvements extending along Midlothian Creek and east of Kedzie Avenue from 139th Street to the Cal-Sag Channel. During the second phase, 2,200 linear feet of streambank along Midlothian Creek will be stabilized, controlling erosion and providing a home for native plants. An 18-acre flood-control pond will be constructed, bioswales will be planted to capture stormwater runoff, and a rain garden will be installed to absorb more runoff from the bioswales and surrounding area before it can discharge into Midlothian Creek.

The project will increase the existing stormwater drainage system from less than a five-year storm level of protection to a 100-year level, removing approximately 140 acres (1,300 parcels) from the flood plain and opening Robbins up to development opportunities, including west of the Robbins Metra station along the Rock Island District line.

The RTA is engaged with the Village of Robbins through the agency’s Community Planning program on two fronts. First, in partnership with CMAP, the RTA completed the Robbins Transit-Oriented Development (TOD) and Industrial Areas plan. The plan envisions new development opportunities made possible by flood mitigation via Robbins Park. Areas directly west of the Metra station are designated as a new TOD area in which the Village would like to focus mixed use residential development. The plan also includes recommendations to improve mobility in Robbins with transportation recommendations as well as recommendations for a renewed industrial area. The RTA is currently working with village officials to obtain a recommendation for adoption from the Planning and Zoning Commission and subsequently assist the Village Board in adopting the plan.

Additionally, one of the very first implementation items of the TOD plan is to amend the Village Zoning Code. The current code would not allow the vision for the TOD area to come to fruition, and the RTA has committed to providing technical assistance to the Village with updates to the zoning code. Potential code amendments will address the current zoning designation in the TOD area, update allowed land uses, include design guidelines for new development, and streamline the zoning review process.

“Between the stormwater park project and the RTA’s assistance in planning and zoning, the Village of Robbins is poised for truly impactful change,” Horsting said.