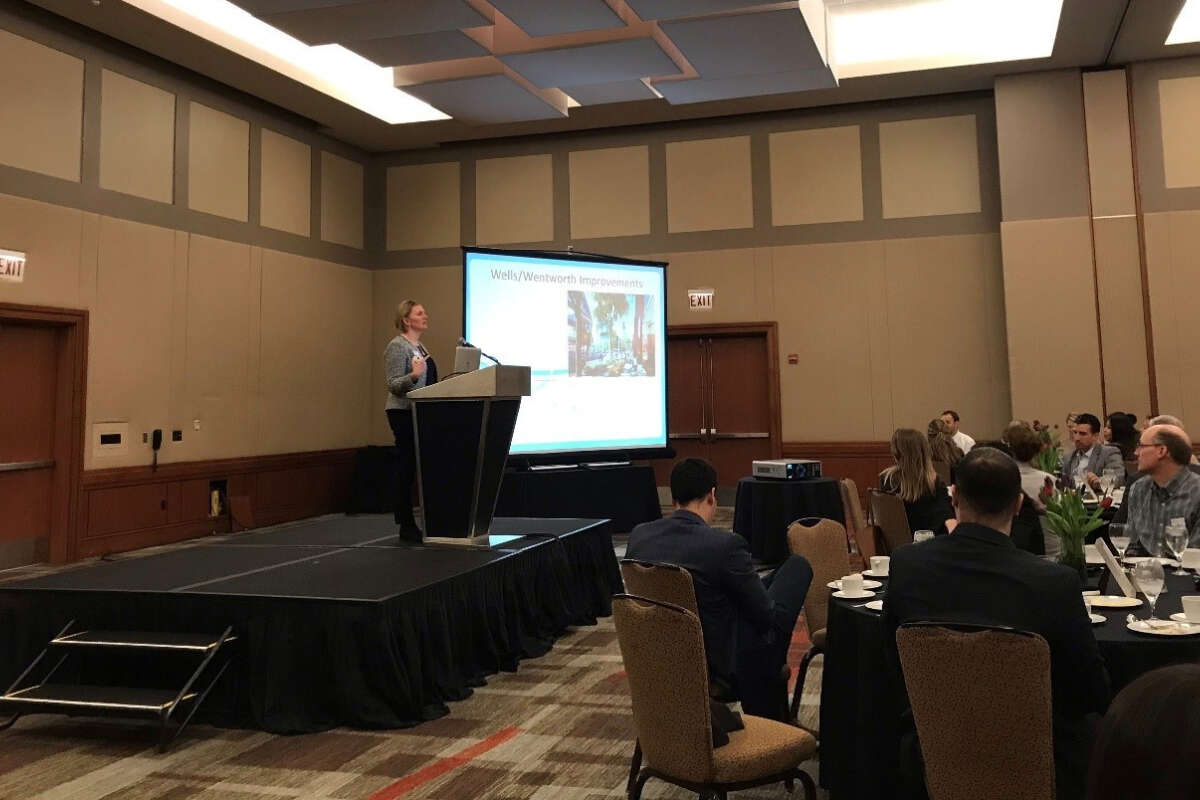 South Loop business leaders gathered recently to learn about development plans for their neighborhood and surrounding areas. Those in attendance were planners, architects, business owners and students all whom were excited to hear about the projects that CDOT is currently undergoing.

The Board of Directors of the Near South Planning Board hosted the luncheon at the Hyatt Regency McCormick Hotel. The guest speaker was the Commissioner of the Chicago Department of Transportation (CDOT), Rebekah Scheinfeld. Prior to being appointed to her current position by Mayor Emmanuel, Commissioner Scheinfeld was the Chief Planning Officer at the Chicago Transportation Authority (CTA). At the CTA, she led the charge in major planning initiatives for transit development in Chicago.

While the Commissioner discussed many successful CDOT projects currently underway, she highlighted some transportation related projects as well. In recent years, a major success for CDOT was the completion of the Washington/Wabash loop elevated station.  The Commissioner said, “The Washington/Wabash station is the first fully accessible station on the east side of the loop.” She went on to explain that the station is a model for how CDOT plans to move forward with updating century old stations in the Loop and was excited to reiterate that CDOT has its eyes set on the State/Lake station next.

CDOT’s South Shore pedestrian accessible bridge projects were also a focal point of the presentation. With the goal of increasing access to the lakefront, the Commissioner announced that CDOT is expecting to start construction on replacing the 43rd Street Bridge in 2019. The bridge will be the third fully accessible bridge connecting Chicagoans to the lakefront. CDOT recently opened the 41st Street bridge that extends over South Lake Shore Drive in December 2018 and the 35th Street Bridge in 2016.

To wrap up her presentation, Commissioner Scheinfeld emphasized CDOT’s awareness of the emergence of micro mobility. Whether it is scooters, bicycles or other small electric modes of transportation, CDOT understands the significance of identifying just how to respond to these transportation alternatives. In October 2018, Mayor Emanuel announced the creation of a New Mobility and Transportation Task Force. This task force, whose Chairman is former U.S. Department of Transportation Secretary Ray LaHood, will look to identify how Chicago must respond and adapt to these new transportation services.

Stephen Rodney is a graduate student pursuing a Master’s in Public Policy at DePaul University. He is the marketing and communications intern for the Regional Transportation Authority. Stephen is also a Chaddick Scholar at DePaul’s Chaddick Institute for Metropolitan Development. He is passionate about transportation, public affairs, urban planning, housing and development. Stephen is specifically interested in transportation because he believes that affordable and accessible public transportation is necessary in order for communities to thrive and for community members to have access to areas of income opportunity.