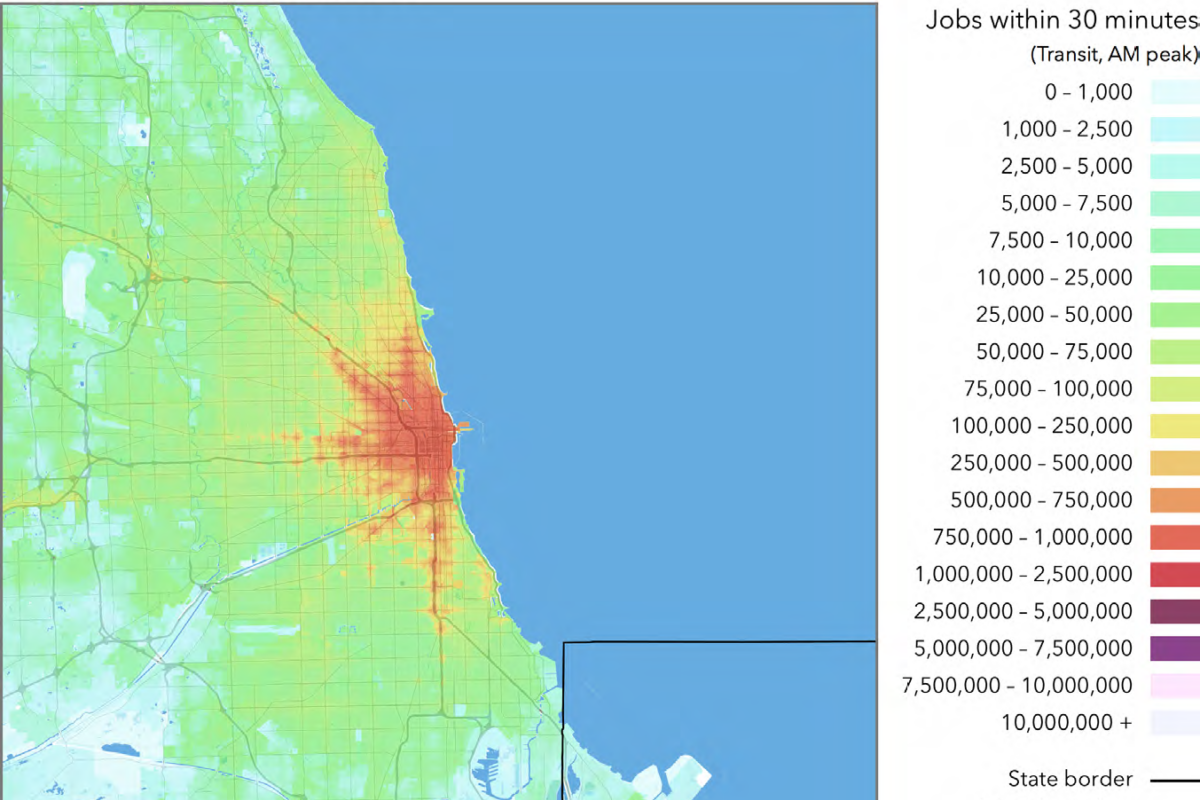 Chicago is a great city for taking transit to get to work!  That was further acknowledged by a recent University of Minnesota Access Across America report, ranking our region as having the 3rd best transit access to jobs in the nation for the second year in a row.  According to their research, in 2016 the average person living in Northeastern Illinois had access to 336,000 job opportunities in a 60-minute transit trip, just behind that of San Francisco and New York City.  RTA’s own analysis for Beginning the Discussion puts that number at 425,000 job opportunities when adding in the value provided by our park-n-ride facilities, and that number grows to 1.1 million jobs accessible to the average resident in a 90-minute transit trip.

Access to jobs is critical. However, some are more challenging to reach and access through transit than others.  For example, while transit availability on Chicago’s south side is relatively high according to CMAP’s new Transit Trends report, many residents are traveling further distances and to more dispersed locations to get to work, and this can result in multiple transfers, longer travel times, or no other option but to drive.  This is one challenge discussed in Invest In Transit, the draft 2018-2023 Regional Transit Strategic Plan for Chicago and Northeastern Illinois, now on the RTA’s website. The Plan presents a realistic vision of the near-term challenges and opportunities facing transit in the region and is available for public comment until the end of 2017.

While our regional transit services excel at providing access to jobs, now is the time to invest in our aging system so it can continue to provide this vital service well into the future and help our region stay competitive.  Not only is our region competitive on job access as the UMN report highlights, we are also competitive on our relatively low cost of living.  We looked at the 10 highest ranked cities for transit access in the Access Across America report, and found that the City of Chicago is 3rd again when ranked by the Cost of Living Plus Rent Index, this time just behind Denver and Philadelphia.  It might come as no surprise then, taking a broader look at national competitiveness Chicago ranks #1 of these 10 metropolitan areas when the cost of living plus rent is considered alongside transit access to jobs.

Yes, these are just two factors one might consider, but they make a convincing argument that if you are looking for transit-friendly job opportunities in a place where your hard earned money goes a bit farther, then look no further than sweet home Chicago!