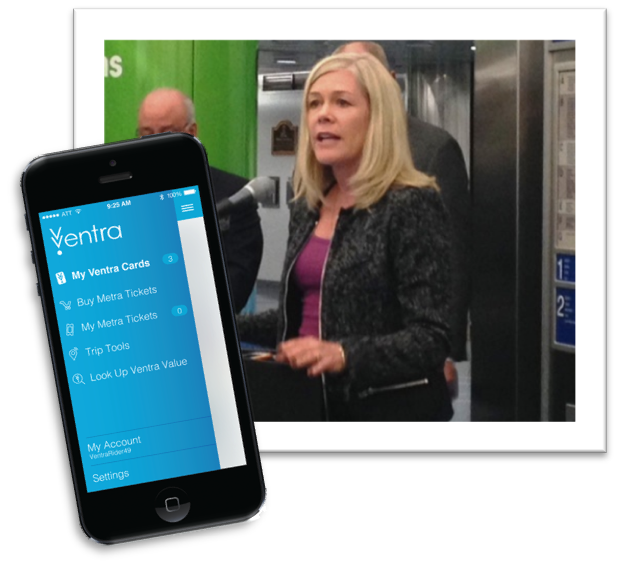 The RTA is proud to be able to provide much of the funding for development of the new Ventra app. The new app will make it easier for you to purchase transit fares and get real-time transit tracker information for the CTA, Metra and Pace. Not ready to download the new app? No worries! You can still buy a Ventra card or pay for a Metra ride “the old fashioned way.”

So, get your smart phones ready to download the new app and see how it makes getting around the region easier. Read more about what’s in store for you with the new Ventra app.

The Chicago Transit Authority, Metra and Pace announced that the new Ventra App will be available to the public on Thursday, November 19.

The Ventra App is the first ever to allow customers to pay for rides on all three transit systems –CTA, Metra and Pace – with a few taps on their mobile devices, transforming the way Chicagoans take transit each day.

The free Ventra App, which was developed jointly by CTA, Metra and Pace and funded by the Regional Transportation Authority (RTA)’s Innovation, Coordination, and Enhancement (ICE) program, will provide a “one-stop shopping” experience that essentially puts a Ventra vending machine as well as a Metra ticket vending machine in customers’ pockets. It will be available for use on Apple and Android smartphone and tablet devices via the App Store and Google Play.

The app will offer customers a wide range of functionality – including some never before available on phones – including account management, loading of transit value/passes, account notifications and integrated mobile ticketing on Metra. It will also provide access to real-time transit tracker information for CTA, Metra and Pace all in one place. Future phases will offer additional services and conveniences.

“Whether you ride CTA, Metra, Pace or all of them, this app will put new options in your pocket when traveling around Chicago,” said CTA President Dorval Carter, Jr. “For the first time ever, customers will be able to use their smartphones to manage their accounts and purchase fares across all of Chicago’s transit agencies. We’re excited to have transit customers to use the app and let us know about their experiences, which will shape updates to the app going forward.”

The Ventra App will allow Metra customers to use a smartphone to buy any type of Metra ticket with a credit or debit card or a Ventra account. Metra mobile tickets are stored on the smartphone and customers will activate them when boarding the train and display them on their phones’ screens when the train conductor checks for tickets. If a Metra customer wishes to create a Ventra account in the app, they can then buy Metra mobile tickets more quickly and recover them if the phone is lost, stolen, damaged or replaced.

The transit agencies determined the first version of the Ventra App was ready for public launch now after several months of exhaustive testing by more than 700 individuals who ride CTA, Metra and Pace. Among the testers were dozens who tried out the app as part of the Smart Chicago Collaborative’s Civic User Testing Group, a highly regarded program that maintains a pool of Chicago residents to road-test new apps under development, as well as customers with disabilities to make sure the app is accessible to customers with visual disabilities.

“This new app will dramatically change the way our customers use Metra because it will allow them to buy their train tickets anytime and anywhere,” said Metra Executive Director/CEO Don Orseno. “This is a tremendous step forward for our agency and we are more committed than ever to leveraging the latest technologies to enhance customer service.”

“From the beginning, Ventra has been developed with the foundation of maximizing convenience for customers, and the Ventra App is yet another way of achieving that,” said Pace Executive Director T.J. Ross. “Providing the means for people to use the same fare media to ride Pace, Metra and CTA is a significant step forward and an example of our shared commitment to work together for the benefit of our customers.”

“The RTA is a proud partner in the launch of this app, as it takes yet another step forward in providing seamless transit services throughout our region,” said Leanne Redden, RTA Executive Director. “This launch represents an important example of collaboration between the Services Boards and the RTA. These partnerships are critical to continuing to providing riders with a world-class transit system.”

Beginning Thursday, customers will be able to use Ventra account funds, pre-tax transit benefits provided by employers, and/or credit and debit cards to purchase transit to ride CTA, Metra and Pace. This initial version of the app will allow customers to:

Also in a later phase, the app will allow customers to download a virtual Ventra card onto their Near Field Communication-compatible mobile devices, which will allow them to access their Ventra transit accounts to pay for rides on CTA trains and CTA and Pace buses directly from the Ventra app by touching the phone or device to a Ventra reader.

Learn more about Ventra at ventrachicago.com. Customers can also interact with Ventra via Twitter (@VentraChicago) and on Ventra Chicago’s Facebook page. Information is also available on CTA, Metra and Pace websites at www.transitchicago.com, metrarail.com and www.pacebus.com.