Our Future
Rides On Transit Chicagoland’s public transit system contributes to our region’s economic, environmental, and social health in ways and at a scale nothing else can.

America’s second-largest public transit system is our region’s strongest tool for combating climate change, enabling seamless connectivity for a new era of work and recreation, and linking disenfranchised and underserved neighborhoods to jobs, education, and prosperity.

The GDP of the 3,700 square miles connected by our regional transit system is equivalent to Switzerland’s economy and accounts for 80 percent of Illinois’ economic output. The system connects approximately 8.5 million people, making it one of America’s largest marketplaces for goods and services.

The region’s workforce of more than 5 million has grown along a regional transit infrastructure that connects residents to employers and connects businesses to customers. Chicagoland transit’s 70-mile reach integrates a magnificent diversity of all races and 135 languages into a world-class labor pool that attracts both top-tier employers and talent.

An estimated 85% of regional commercial construction in 2017 was built within one-half mile of a transit station. Indeed, 60% of all new jobs added to our regional economy between 2005 and 2015 were located along high-quality public transit. Nationally, some 50,000 jobs are created for every $1 billion invested in regional public transit.

Our transit system connects great universities and research hospitals where the future economy is being invented, just as it connects our future workforce to the colleges and vocational institutions that teach skills for high-demand jobs.

Transit is our strongest tool in the fight against climate change

In the U.S., exhaust from cars, trucks, and planes is the single biggest source of carbon dioxide emissions – the largest contributing factor to climate change. Public transportation offers our region the greatest opportunity to reduce carbon emissions: bus emissions per passenger mile are 33 percent lower than cars and passenger trains are 76 percent lower.

Public transportation’s overall effects save the U.S. 6 billion gallons of gasoline a year.

The average American household spends 16 cents of every dollar on transportation, and 93% of that goes to buying, maintaining, and operating cars, the largest expenditure after housing. Transit offers the most affordable way to move around our region. A Chicagoland resident who switches their daily commute from driving to public transportation can save an average of $12,000 a year.

The average resident in the region of 8.5 million can reach over 150,000 job locations each weekday morning within a 45-minute transit trip. Given the cost savings of transit versus car ownership and dependency, this access to work can translate to upward mobility for Chicagoland’s most vulnerable.

Transit fares are consistent and predictable compared to both the cost of gasoline and the cost of ride hail services. In Chicago, ride hail users paid an average of $26.43 per trip in June 2021— 60 percent more than the same month in 2019.

For references, please see Forward For All factsheet. 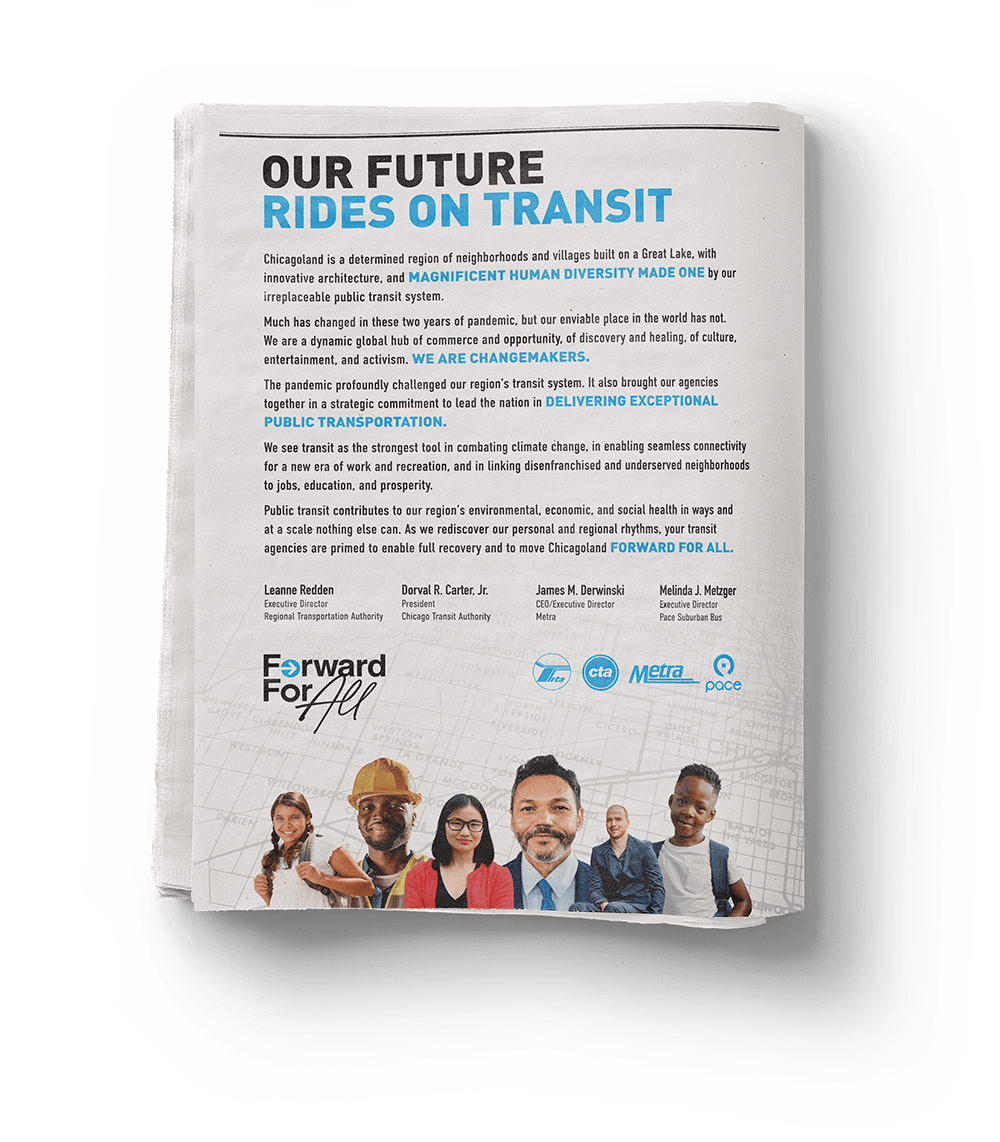 The Forward For All initiative was introduced in the Chicago Sun-Times, Daily Herald, Daily Southtown and Crain’s, as well as several minority-owned and community publications.
Promotional Toolkit
Click here to access a Forward
For All promotional toolkit.
View the Toolkit!
Regional Transit Update
The RTA sends a twice-monthly e-newsletter with important information about the transit system.
Subscribe Now!